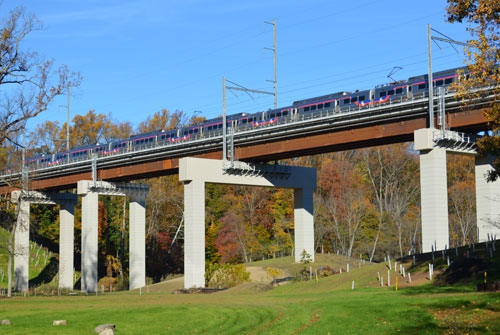 The original steel version of the Crum Creak Viaduct was built in 1895, spanned 915 feet and stood 100 feet high. The bridge carries over 3 million passengers annually with 320 passenger trains each week along the Media/Elwyn Line into and out of Center City Philadelphia. The bridge needed replacement, but that work had to cause as little commuter disruption as possible. Therefore, the work was timed to only take 11 weeks from demolition to reconstruction and restoration of service.

Carr & Duff, Inc. was tasked with providing and maintaining temporary power for the site, demolition of all aerial cables and installation of new conduits, cable, catenary support steel as well as grounding of the new structure for SEPTA’s Crum Creek Viaduct replacement.

During construction, Carr & Duff, Inc. provided an 1,800-foot-long high voltage temporary service from nearby Swarthmore College to the construction site, and subsequently removed the service at the end of the project. Before demolition, the existing electric infrastructure had to be removed, including more than two miles of SEPTA’s 24,000 volt transmission lines, aerial signal and communication cables, messenger cables and two tracks of overhead catenary cables and support hardware for each of the mile-long track sections.

The new bridge was built with accelerated bridge construction techniques, designed to match the existing alignment and minimizing effects on the existing viaduct structure while it remained in-service. Substructures were built adjacent to the existing bridge, temporary brackets were erected and new girders and the deck were constructed on the temporary brackets. During the outage and after the old bridge was demolished, the general contractor performed a lateral slide of the new structure.